Remembering safe sleep practices is as easy as ABC... Alone, Back, Crib

A STANDS FOR ALONE 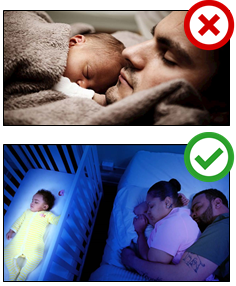 Alone means that babies should be placed in their OWN safe sleep space, not to be shared with a caregiver, sibling, pet, etc.

This can be a confusing message and is not meant to be a term of neglect, or lack of attachment. We are not suggesting or recommending to parents that they leave their infants alone in a different room.

American Academy of Pediatrics recommends that babies sleep in the same room as their parents for at least the first six months of life (ideally, for the first year of life). This makes routines easier for feeding, and convenient when baby needs attended to.

The top picture is portraying an unsafe sleeping environment - dad sleeping with the baby. Parents can hold their babies while the baby is sleeping, but we need to ensure that caregivers are also not sleeping while holding their babies.

The bottom picture represents the golden rule or phrase, share the room not the bed.

The safest place for a baby to sleep is in the room where their parent/caregiver sleeps, but not in their parent’s bed. 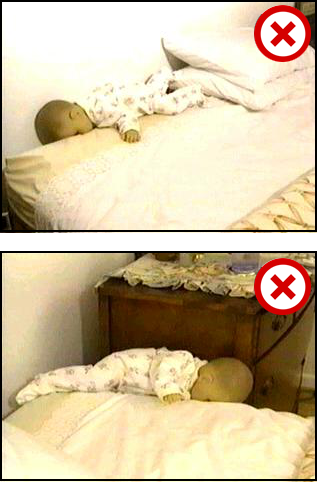 Adult beds are dangerous for babies to sleep; there are many things that could happen:

B STANDS FOR BACK

B stands for back – back is best. The safe sleep recommendations have changed over the years, and this typically needs the most time for explaining to parents and caregivers because there is a lot of misinformation out there regarding sleeping position and what is safest.

Babies should be placed on his/her back to sleep for their first year of life.

Placing babies to sleep on their back makes it easier for them to breathe, receive clean, fresh air/oxygen, and they are less likely to choke when sleeping on their backs.

Why is the back position safer than the belly position? Watch this one minute video to learn how to explain to parents why it is dangerous for a baby to sleep on their stomach and why back is best. 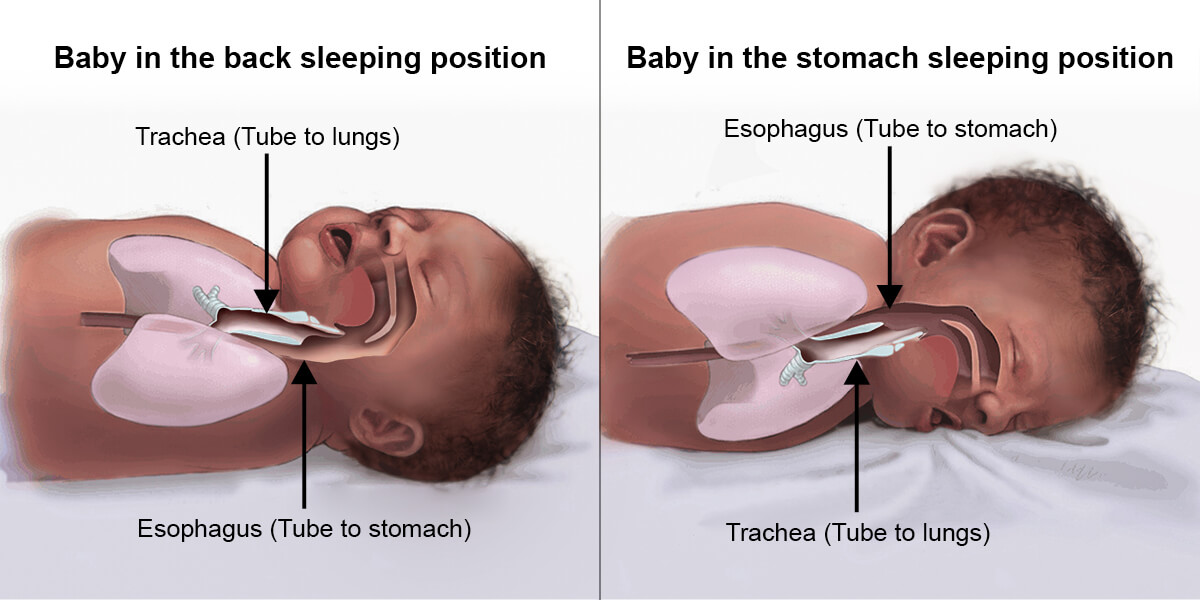 Looking at this picture, you can see that babies have two tubes on top of one another, one being the trachea and one being the esophagus. On the right hand side, the baby is placed on their stomach to sleep, if they were to spit up, that liquid would travel to the lowest tube which would take the spit up to the trachea which leads to the lungs and can cause aspiration.

On the left hand side, you can see when a baby is placed on their back to sleep, if they were to spit up, that liquid would travel to the lowest tube, which is now the esophagus since they’re flipped over.

Gravity is going to carry that liquid to the esophagus which will lead the stomach - Which is exactly where we would want it to go!

Also, looking at this picture, when a baby is placed on their stomach to sleep, they are not receiving clean, fresh oxygen, they are actually breathing in their own carbon dioxide that they are breathing out, which is a danger for suffocation.

This video and picture will be a great resource when explaining the anatomy to families and why placing baby on their backs is the safer choice.

You may have families ask questions regarding rolling, which is when we would want to introduce information to them about repositioning.

If a baby can NOT consistently roll to their stomach ON THEIR OWN, then they should be repositioned on their back each time they end up on their stomach.

If baby can consistently roll to their stomach on their own, then they will not need to be repositioned each time because they have the muscle memory to move their head to the side or even the strength to roll back on to their back.

Families may ask about their babies developing flat head (plagiocephaly). One way to combat this, while still having babies sleep on their backs, is to practice supervised tummy time. Parents should be encouraged to place their baby on their tummy while awake and supervised for short periods of time beginning soon after hospital discharge. Parents/caregivers should increase tummy time incrementally to at least 15-30 minutes daily by 7 weeks of age.

C STANDS FOR AN EMPTY CRIB 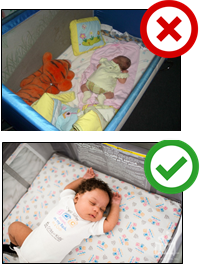 C stands for an empty crib. We want to encourage parents to place their babies in a crib, portable crib, or bassinet whenever the baby is sleeping, for every nap and every night time sleep wherever they are.

Empty cribs are best, it eliminates dangers related to suffocation – we would recommend on having a firm mattress and tightly-fitted sheet in the crib or safe sleep environment when baby is sleeping.

Please do not encourage the use of blankets, pillows, stuffed animals, etc.

Something to emphasize to parents is that babies do not know comfort until you introduce it to them. Unlike us, babies are perfectly content in what we would consider a boring or uncomfortable sleeping environment without blankets, pillows, mattress toppers, etc.

Sleep clothing, such as sleepers, sleep sacks, and wearable blankets are safer for baby than blankets. Dress the baby, not the bed!

It is recommended to place the portable crib in parent’s room for at least the first six months of life, ideally for the first year.

The portable crib should be placed away from windows, drapes, curtains, corded blinds, electric cords, vents, radiators, and space heaters.

The temperature in baby’s room should be set between 68-72 degrees.

Sleep surfaces should be firm, flat, and non-inclined. Any surface used for sleeping with an incline of more than 10 degrees, is unsafe.

It is recommended by the AAP that weighted blankets, weighted sleepers, weighted swaddles, etc. should not be placed on or near a sleeping infant. These products increase the risk of suffocation and SIDS, and should not be encouraged for use.

We have discussed the ABCs of safe sleep, however, there is a D and E as well.

The D is for don't smoke.

Smoking around the baby or near their environment can cause secondhand and thirdhand smoke health concerns causing baby to constantly breathe in carcinogens from smoke, vape, etc.

There are resources available if a mother or family member would like to quit smoking such as the Ohio Tobacco Quitline (1-800-QUIT-NOW).

Smoking while pregnant increases the risk of SIDS.

Parents should not smoke or allow anyone else to smoke around baby. This includes cigarettes, hookahs, vapes, or smoke pens.

Parents/caregivers should be encouraged to avoid smoke and nicotine exposure during pregnancy and after birth to reduce the risk of SIDS.

Parents/caregivers should be encouraged to avoid alcohol, marijuana, opioids, and illicit drug use during pregnancy and after birth.

E STANDS FOR EDUCATE EVERYONE

And finally, the E stands for educate everyone.

There is a percentage of safe sleep deaths that occur outside of the care of immediate family, such as daycares, babysitters, etc.

Everyone who is watching the baby should be educated or informed on the ABC(DE)s of safe sleep. Encourage parents to advocate for themselves and for their babies' lives.

Encourage parents to talk about safe sleep with their:

Please rotate your screen in landscape mode to play the game.

Please open your browser viewport to play the game.

There are 10 unsafe items in the following picture.
Click on all 10 to make the crib safe...

Back is best! Babies who sleep on their backs breathe easier and are less likely to suffocate or choke. Place your baby on their back to sleep for the first year of life.

Blankets are dangerous, a baby could cover their face or roll over onto blanket causing suffocation or strangulation. Do not place anything in the crib with baby besides a firm mattress and tight-fitted sheet. Consider using a "sleep sack" instead of blankets to keep your baby warm. Remember to dress the baby not the bed.

Bumper pads are dangerous due to suffocation, baby may position themselves against the pads and be unable to move or become trapped between the mattress and bumper pads. Do not place anything in the crib with baby besides a firm mattress and tight-fitted sheet.

Space heaters are dangerous due to fire hazard; they can also make the room too warm. The ideal room temperature for babies to sleep is between 68 and 72 degrees. Do not place crib/portable near any heating source such as a space heater, a fireplace, or a heat vent.

Loose curtains and cords from window blinds are dangerous and create a risk for strangulation. Do not place crib/portable crib near windows, blinds, or loose curtains.

Babies are curious and could easily grab and ingest the pills next to the crib. All medications should be place out of sight and out of reach of all children. Do not place pills or medications near a crib/portable crib due to poisoning and/or choking hazards.

Pillows can be dangerous due to suffocation, a baby could turn or roll over and their face could be covered by the pillow causing suffocation. A pillow should never be used for a baby as a positioner and should never be in a crib. Do not place anything in the crib with baby besides a firm mattress and tight-fitted sheet. To decrease risk of baby developing plagiocephaly, or "flat head," practice supervised tummy time while baby is awake.

Bottles, especially when filled, are dangerous due to choking, suffocation and asphyxiation. Babies should always be supervised during feedings. Do not place anything in the crib with baby besides a firm mattress and tight-fitted sheet.

Outlets are dangerous due to fire hazard and electrocution. Do not place crib/portable crib near outlets to prevent an older infant from playing with or putting something into the outlet.

The crib is now safe.

Know someone that might learn something from this site?